Barrackpore, the headquarters of Barrackpore subdivision is situated in the North 24 Parganas district of Northern Kolkata. Barrackpore comes under the area covered by the Kolkata Metropolitan Development Authority in West Bengal. This city has got historic connection as it was British's military and administrative center. Also Barrackpore witnessed two major acts of rebellion against Britain during the 19th century.

Barrackpore is the pla Indian struggle for freedom was initiated. Barrackpore used to be the military and adminstrative centre of British due to its proximity to Kolkata, where the East India company was established. Not only this, Barrackpore has the oldest cantonment in India. It has witnessed two major acts of rebellions which are etched forever in India's history. First rebellion took place under sepoy Bindce Tiwary also known as Bindi Baba in 1824. The second mutiny took place in 1857 under the leadership of Mangal Pandey. It was also known as first war of Indian Independence. More on history of Barrackpore can be read on the page 'History of Barrackpore'.

Barrackpore is situated at a longitude of 22.76°N and latitude of 88.37°E with an average elevation of 15 metres. Barrackpore located in the North 24 Paraganas district in West bengal is situated quite close to Kolkata, the capital of the state. Barrackpore is located on the banks of Hooghly river which flows through its west. This city has two well known bridges named Jubilee bridge and Bally bridges.Both the bridges acts as a major connecting centre. You can also find many ghats in Barrackpore. The climate in Barrackpore is hot and humid throughout the year except from November to February when it is pleasant, thus making it the best time to visit Barrackpore. More on this can be read on the page "Geography of Barrackpore".

Areas and Localities of Barrackpore

Barrackpore has many prominent areas and roads in the city like B.T. Road. This road is a major connecting road in West Bengal. Barrackpore Chiriamore is another important area which has majority of the buses passing through it. Most of the commercial retail stores are located on the S.N. Banerjee road and in and around Barrackpore railway station. You can also find many pharmacies and hospitals on S.N. Banerjee road. Other prominent areas include Shyambazaar, Subhash nagar, Barasat university, Barabazaar, Sovabazaar, Central avenue and many more. 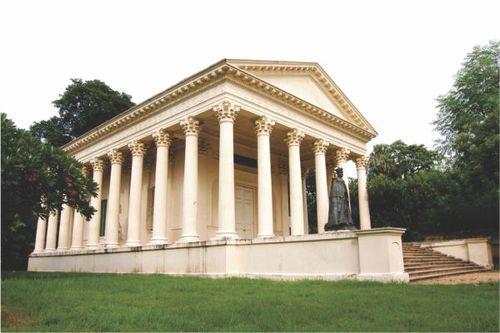 Barrackpore due to its historic connections attracts many tourist every year. There are many attractions to see in Barrackpore which includes the Mangal Pandey park which is built as a dedication to this freedom hero. There are also many temples located on various ghats in Barrackpore which are worth visiting. The Gandhi musuem there has vivid collection of all the writings of Mahatma Gandhi and his various tape recordings. It also homes the oldest cantonment in India which now wears a deserted look. Flag staff house built during the British look is also worth a visit. More on tourism can be checked on page 'Tourism in Barrackpore'.

Barrackpore sub-division has 16 Municipalities and 2 Blocks under it. These local bodies are administered by a municipal chairman and Cantonment board. Barrackpore sub-division contains two parliamentary constituencies and eleven Assembly Constituencies. Barrackpore is also home to the Police Training Academy and oldest cantonment in India. The Sub-Divisional Court of Northern 24 Parganas District also has a seat reserved for representative from Barrackpore. The law enforcement in the city is taken care by Barrackpore Police Commissionerate. The main political parties in Barrackpore are the CPI(M) and the All India Forward Bloc which is a leftist party. Mr.Dinesh Tribedi of AITC won the recent Lok Sabha constituency in 2014 defeating Subhashini Ali of CPM. Their contact number is mentioned below. 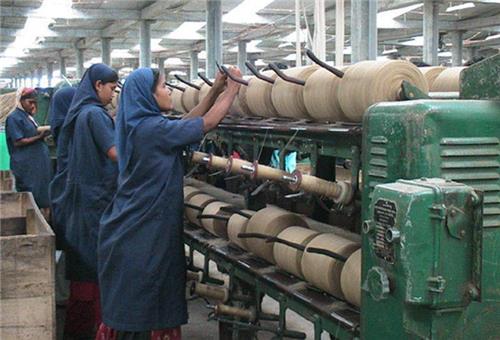 Jute Factory
Barrackpore economy is also supported by agriculture which produces a variety of crops. Many efforts are being taken for development of agriculture and agricultural infrastructure including a well-developed irrigation system, low interest loans and many more such facilities. Horticulture, Pisciculture and Floriculture have also flourished in the town. The main purpose of establishing Central Inland Fisheries Research Institute at Barrackpore was to enhance the production of fishes mainly in rivers and ponds. Barrackpore also has renowned factories like Ishapore Rifle Factory which supplies arms to the Indian security forces. It is one of the important factories of India. Cables produced by Nicco and Dry cells produced by Exide are other industrial products of Barrackpore.

Barrackpore,like any other Bengali city serves some amazing Bengali cuisine. Some of the well known food joints in Barrackpore includes Dada Boudi where the biryani is extraordinarily delicious. But this will take in a lot of effort including waiting in the queue. So, you can also opt for Dhaka biriyani which has much better ambiance and lesser crowd. Sona is another restaurant well known for its biriyani. Jeluas is a very old sweet shop located opposite to the station and serves excellent kachoris and rabri. Sudama restaurant serves variety of rolls. The Koley's kitchen serves chinese and tibetan food and they are best known for momos which is served steaming hot with a spicy chatni. V cafe is the place for a quick grab and is economically friendly as well.

Barrackpore is the birthplace of many was fighters of Indian independence movement. Infact many of them have their memorials here as well. Rastraguru Surendra Nath Bandyopadhyay, also known as the father of Indian Nationalist Movement, belonged to Barrackpore. His house at Monirampur in Barrackpore has now been transformed into Netaji Open University and the Rastraguru Surendranath Institute. Other prominent artist belonging to Barrackpore includes Bengali author Bharat Chandra Ray Gunakar who was known for writing Annada Mangal, Ramprasad Sen, who has written many religious songs, Bankim Chandra Chattopadhyaya, who is the author of "Vande Mataram", Shekhar Ghosh who was a Gallantry Award winner and a Army Captain. 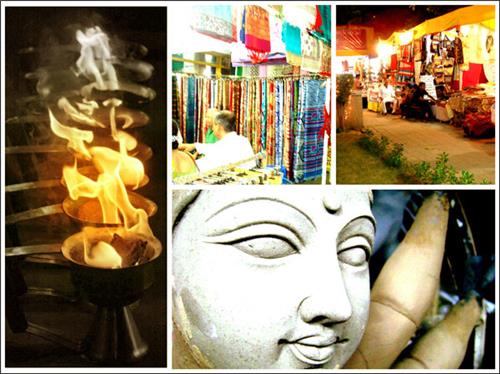 Culture of Barrackpore
Barrackpore is said to have been visited by Sri Ram Krishna Paramahansa, Mahatma Gandhi and Gurudev Rabindranath Tagore. Mahatma Gandhi used to love coming to Barrackpore and his museum here has a rare collection of articles and books used by Gandhi.Barrackpore also has a auditorium named 'The Sukanta Sadan theatre hall' which is located in the main town. Here, Bengali festivals such as Kali puja and Durga Puja are celebrated with great enthusiasm every year. A month-long fair is organised every December–January at the temple of the goddess Kali at Shyamnagar which is located on the bank of the Ganges.Also the majority of the people here are Bengali and Hindu. But you can find people belonging to all castes and creed staying peacefully in Barrackpore. Mandirs, Gurdwara, Masjids, churches and ashrams coexist there.

Barrackpore only has movie theatres to keep you entertained. There are about 4 cinema theatres spread across the city where you can enjoy and spend time watching movies with your family. All the movie theatres in Barrackpore are listed below

Some personalities from Barrackpore has managed to etch their names in the Indian history of freedom struggle. They are discussed below.

Surendranath Bandyopadhyay (1848-1925) : He was a great patriot, orator and scholar. Mahatma Gandhi described him as one of the makers of modern India.

Satish Chandra Dasgupta: He was a very close associate of Mahatma Gandhi and founder of Khadi Prathistan at Sodepur in 1925.This institution helped in emergence of Khadi. He also initiated publishing ‘Rastrabani’, a magazine in both English and Bengali. 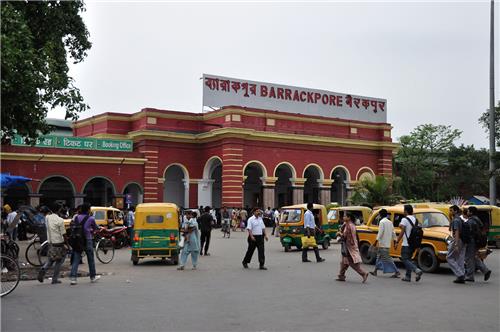 Most of the trains starting from Sealdah station located on Eastern Railways, stop at Barrackpore. It takes about 35 mins to reach Barrackpore from Sealdah. Infact Barrackpore is connected via local trains with Kolkata. So it becomes much easier for transit between Kolkata and Barrackpore. Kolkata is in turn connected to all major cities of India. Barrackpore and Kolkata are connected through B.T. (Barrackpore Trunk ) Road. Kalyani Expressway which connects Kalyani to Birati also bypasses the Barrackpore outskirts. Another major road connecting other cities to Barrackpore is the closest point of Belgharia Expressway, which then becomes National Highway 6 (NH6) is located just 10 kilometer away from Barrackpore. Apart from these, two National Highways, NH-34 and NH-35, and many other major State Highways pass through this area, thus making it very accesible. Within Barrackpore you can travel by bus, auto-rickshaw or manual rickshaws. Buses are one of the most accessible transport system within the city with the buses running frequently. Majority of the bus route series includes RT series, JM series, MM series, K series, CTC bus routes and CSTC bus routes. Read More.....................

There are Ferry Services available as well connecting Barrackpore to Srirampore, Baidyabati and Sheoraphuli. There is transport available up and down the Hooghly river as well.

Comments / Discussion Board - About Barrackpore