Barrackpore is a city located close to Kolkata about 23 kms away. This city hold historical importance and is visited by a lot of tourists every year. Location of Barrackpore is makes it easy accessible from any part of the country. From rivers to ghats and undulating plains all can be found impacting the daily life of the people residing here. 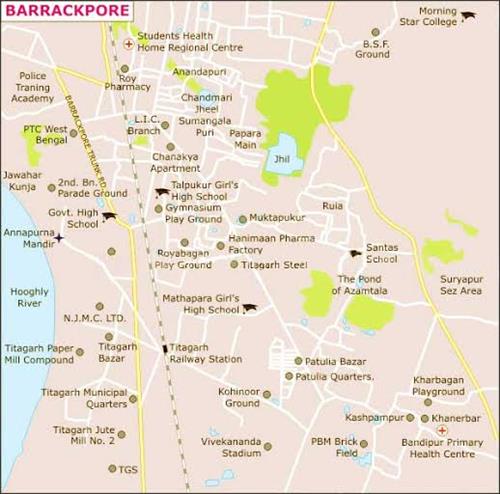 Barrackpore is situated at a longitude of 22.76°N and latitude of 88.37°E with an average elevation of 15 metres. This city lies in the Ganges-Brahmaputra delta region on the eastern bank of Ganges river in West Bengal. It is located about 115 kilometres away from the Bangladesh border. Barrackpore has a population of 144,331 with 53% of the population being men while women constitutes 47%.

Barrackpore is warm and humid throughout the year. However, it experiences winter from the month of November to February when the weather is quite pleasant and this is the best time to visit this place. Monsoon starts generally in the second week of June and ends in September. It receives approximately 175 Cms annually.

The main river of Barrackpore is Hooghly river which flows all along the westside of Barrackpore for about 50 km. This river is also known by the name Bhagirathi or the Ganga. The ganga river dips east through Bangladesh while the Hooghly river which is its tributary flows through Kolkata. Barrackpore has two bridges on the river Hooghly which is Jubilee Bridge and the Bally bridge at Dakshineshwar. There is another Rail Bridge built in 1885-1887 and is the oldest rail bridge in Bengal.

Jubilee Bridge in Barrackpore: It is a rail bridge built over Hooghly River connecting Naihati and Bandel in West Bengal. Jubilee Bridge has Garifa station on one side and Hooghly Ghat stations on the other side. This bridge was innaugrated on 16 February 1887 to mark the celebration of jubilee year of Queen Victoria s reign. The construction of this bidge began in 1882 and was completed in 1887.This bridge was built under the guidance of the Chief Engineer, Lt Col Arthur John Barry. Its designing was done by Sir Bradford Leslie and Alexander Meadows Rendel. The steel used to built it was manufactured by James Goodwin of Motherwell in Scotland and Hawks Crawshay of Gateshead in England.The unique and noteworthy point about Jubilee Bridge is that it is a cantilever truss bridge, which means its constructed entirely without using any nuts or bolts

Bally Bridge: This bridge is also known as Willingdon Bridge and Bally Bridge. Its a brige built over the Hooghly River connecting Bally to Kolkata at Dakshineswar. This multispan steelbridge was built in the year 1932 and about 2,887 feet long. It provided rail and road link between the Calcutta Port and its hinterland. It took about 5 years to complete the construction of this bridge. This bridge was named Willingdon Bridge after the Viceroy of India. This bridge connects Sealdah station to Delhi while the road bridge connects Grand trunk road o the Howrah side to B.T. road on Kolkata side.The famous Dakshineswar Temple is situated quite close to this bridge. There is also Nivedita Setu which is cable stayed bridge and runs parallel to this bridge over Hooghly river.

Barrackpore has number of ghats which are built along the river for various purposes like bathing, crematoriums and trading activities. Most of these ghats have temples and ashrams built on it. The name of the various ghats at Barrackpore are Baromandir Ghat, Panihati Mahotsabtala Ghat, Nemaitirtha Ghat, Tranbabur's Ghat, Giribala Ghat at Agarpara, Sen's Ghat, Gandhi Ghat, Bazarer Ghat, Shyam ghat, Ram Ghat, Kunti Ghat, Raskhola Ghat, Dakshineswar Temple Ghat etc.

Comments / Discussion Board - Geography of Barrackpore